HCM CITY  An online book sale has been launched to raise funds for the Trần Văn Khê Foundation, a non-profit organisation named after late Professor Trần Văn Khê, a legendary musicologist, writer and teacher, as well as talented performer of Vietnamese music.

Profits from the sale of the book Trần Văn Khê — Tâm và Nghiệp (Trần Văn Khê — Life and Career) will be sent to the foundation, according to the publishers, the Lao Động Publishing House and Thái Hà Books.

Readers can order the book via tranvankhefoundation@gmail.com.

Prof Khê was born in 1921 to a traditional family in Mỹ Tho City in the Mekong Delta province of Tiền Giang.

His love for Vietnamese music began when he was a child. He studied the đàn kìm (two-stringed banjo) and đàn tranh (Vietnamese 16-string zither) with his father while at school.

In 1949, he was sent to study in France. In 1958, he defended his doctoral dissertation on traditional Vietnamese music in Paris, becoming the first Vietnamese to earn a doctoral degree in music. 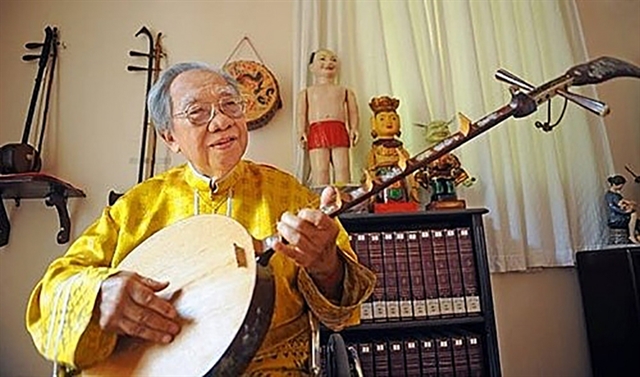 He was an honorary member of the International Music Council (IMC), founded in 1949 by UNESCO, and a member of the European Academy of the Sciences, Letters and Arts.

He lived in Paris for more than 50 years and worked to research and expand Vietnamese music through his performances, talks and writings. He received many top prizes and medals from international organisations for his contributions to music.

In 2005, he returned to live in HCM City. He donated to the city his massive collection of hundreds of documents, research books, dictionaries, videos, cassette tapes and CDs about Vietnamese folk songs and music as well as ancient musical instruments like đàn bầu (monochord) and16-string zither.

His collection was packed in 460 parcels and shipped from France to Việt Nam. They are stored at libraries and museums in HCM City.

The book Trần Văn Khê — Tâm Và Nghiệp was first released in 2016 in HCM City, one year after Khê’s death.

The Trần Văn Khê Foundation was established last year. It is managed by a group of cultural researchers and artists in HCM City. The foundation works to encourage and support young musicians and theatre artists in their careers. It also honours individuals and groups for their contributions to Vietnamese music and theatre.— VNS